Mandatory Injunction In Quebec (Overview: All You Need To Know) 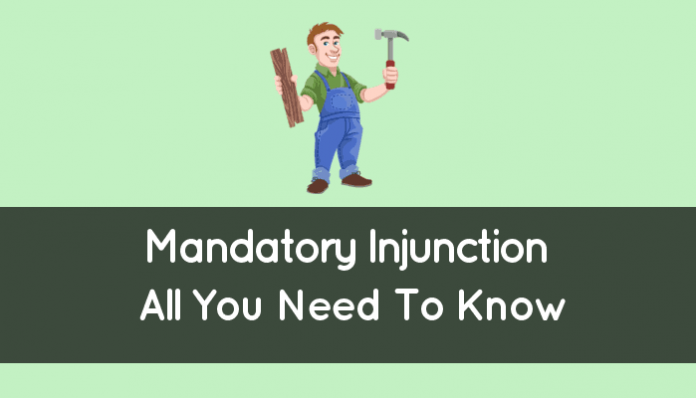 What is a Mandatory Injunction?

How do you legally define it?

In this article, we will break down the notion of Mandatory Injunction so you know all there is to know about it!

A mandatory injunction in Quebec is a legal remedy where the court orders the defendant to do something or act in a certain way.

By their nature, injunctions are extraordinary remedies.

In other words, they are exceptionally granted by the courts to provide the plaintiff justice.

A plaintiff in a civil lawsuit has a high legal barrier to overcome in successfully establishing the underpinnings of a mandatory injunction.

A mandatory injunction can either be issued during the civil lawsuit (on a pre-trial basis) or permanently (on the merits of the case).

For a mandatory interlocutory injunction (during the proceedings), a plaintiff must demonstrate:

In other words, the plaintiff has to show that by having the court mandate the defendant to do something, it has a strong case both in fact and law allowing it to potentially succeed on the merits of the case.

The courts have established a high threshold in granting mandatory injunctions as they recognized that they may be costly or burdensome for defendants, such orders are difficult to justify in an interlocutory stage, and there may be severe consequences to the defendant forcing to do have the court to an extensive review of the merits of the case at the interlocutory stage.

For a permanent mandatory injunction to be granted by the court, the parties will need to present their evidence and legal basis on the merits of the case.

A mandatory injunction is issued when a court directs a person to perform certain acts, as opposed to prohibitory injunction, which seeks to preserve the status quo.

In essence, when the court issues a “mandatory” injunction against a defendant, it orders the defendant to positively do something.

In the Quebec Civil Code of Procedures, article 509 defines an injunction as:

An injunction is an order of the Superior Court directing a person or, in the case of a legal person, a partnership or an association or another group not endowed with juridical personality, its officers or representatives to refrain from or cease doing something or to perform a specified act.

It is a “order” of the “Superior Court” directing a person to “refrain from or cease doing something” or to “perform a specific act”.

To “perform a specific act” captures the definition of a mandatory injunction where a person or company is ordered to do something.

An injunction is a special measure exceptionally granted by the court.

In fact, article 509 of the Civil Code of Procedure is part of Book VI (Special Procedures), Title I (Provisional and Control Measures).

There are different types of injunctions, namely:

On the other hand, a mandatory injunction is an order from the court compelling the defendant to positively act or do something.

A permanent injunction is a request filed by a plaintiff asking the court to issue an order that permanently requires the defendant from doing or refrain from doing a certain thing.

An interim injunction is a short-live injunction a plaintiff can file without the presence of the defendant to get an immediate relief when there’s urgency.

Typically, this is a pre-trial form of relief allowing the plaintiff to preserve the status quo until the court or a judge is able to hear the matter.

Finally, you have an interlocutory injunction which is also a pre-trial type of injunction that is issued during the entire legal proceedings.

Generally, the interlocutory injunction is valid and enforceable until the hearing on the merits of a case or until a particular default is remedied or action performed.

What are the legal tests or thresholds that you must meet to successfully obtain a mandatory injunction from the Quebec Courts?

To start with, if you are looking to seek a mandatory injunction, you must assess your confidence level in winning the case in general.

In the case RJR – MacDonald Inc vs Canada (Attorney General), the Supreme Court of Canada established that you must meet a three-part test for the granting of an injunction:

On February 9, 2018, the Supreme Court of Canada, in the case R. v. Canadian Broadcasting Corp clarified the test applicable to mandatory injunctions.

A mandatory injunction is when a defendant is ordered to do something or to act in a certain way.

In this case, the Supreme Court indicated that the plaintiff or applicant must demonstrate more than a serious issue to be tried (criteria established in the RJR – MacDonald Inc vs Canada (Attorney General) case.

The plaintiff must demonstrate a strong prima facie case to the court where it can establish that it has a high likelihood in fact and law of proving its allegations on the merits of the case.

This test applies strictly to mandatory injunctions where the plaintiff demands from the defendant to do something.

A “strong prima facie case” should be evaluated in a flexible way by the courts and consists of finding the merits of the case where the plaintiff can show it has a “strong likelihood on the law and the evidence” that it will successfully prove its allegations in the originating application.

In practice, mandatory injunctions are rare in Quebec civil lawsuits.

However, they can be quite an effective weapon for litigators when they are able to meet the legal thresholds necessary to seek and obtain a mandatory injunction order against the other party.

In commercial litigation, mandatory injunctions can be seen in the context of media coverage, conflicts between privacy and free speech rights, labour disputes, or other civil wrongs such as defamation or the public disclosure of private facts online or on social media.

The most notable example is in the case R. v. Canadian Broadcasting Corp. where the issue before the Supreme Court of Canada was whether or not a media company (CBC) must remove certain posts from its website.

In this case, a man was accused of the murder of a 14-year-old girl.

During the criminal proceedings, the Crown Prosecutor was able to obtain a ban on the publication of the victim’s identity.

However, by then, CBC had two posts on its websites identifying the victim.

Although CBC agreed to no longer issue posts about the victim going forward, it did not agree to take its posts down before the ban was issued.

Eventually, this matter goes to the Supreme Court of Canada who ruled that, in fact, the Crown Prosecutor did not meet its burden of proof for a mandatory injunction.

So what is the legal definition of Mandatory Injunction?

If you enjoyed this article on Mandatory Injunction, we recommend you look into the following legal terms and concepts. Enjoy!

Related to Court Procedures in Quebec

Contractual Liability: Damages For Breach of Contract Under Quebec Law

End Of Contract: Legal Termination Of Contract (All You Need To Know)

How To Collect Past-Due Accounts (Step-By-Step)