Punitive Damages In Quebec (Overview: All You Need To Know) 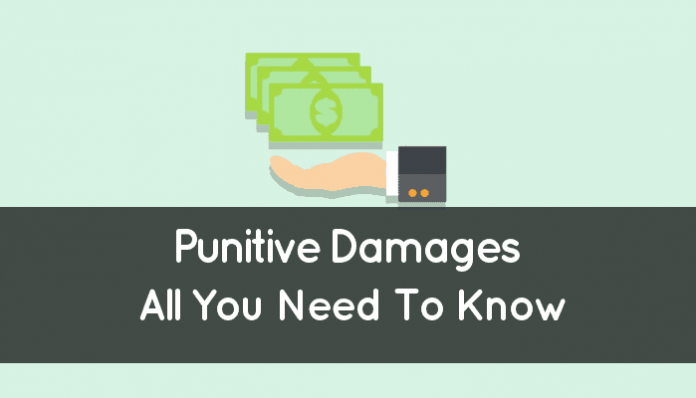 What are Punitive Damages?

How does it work under Quebec laws?

In this article, we will break down the notion of Punitive Damages so you know all there is to know about it!

Under Quebec laws, punitive damages are legal awards in favour of a civil lawsuit plaintiff over and above the amount required for the plaintiff to be fully compensated for the damages or injuries suffered.

In the Quebec civil law, a plaintiff can demand compensatory damages for any prejudice or harm suffered.

However, punitive damages can be awarded provided the law has an express provision authorizing the Quebec courts to grant an award intended to “punish” the defendant for its misconduct, wrongdoing, or injuries caused.

Generally, punitive damages are awarded in the form of a monetary award (“dommages-intérêt”).

The objective of “punitive” damages is to award a sum of money to the plaintiff, over and above the victim’s damages, primarily intended to punish the reprehensible behaviour or conduct of the defendant.

In this context, the objective pursued by the court is to ensure that the defendant, in the case in question, no longer adopts the same or similar behaviour in the future.

In some cases, punitive damages can be granted where the Quebec courts send a message to the Quebec residents that a particular behaviour will be severely sanctioned by the courts.

In essence, the idea is to dissuade others from adopting the same or similar behaviour as the defendant in the case at bar.

When the objective is to set an example, some refer to the awarded damages as “exemplary damages”.

Article 1621 of the Civil Code of Quebec provides the general substantive framework applicable to punitive damages under the Quebec civil law.

Where the awarding of punitive damages is provided for by law, the amount of such damages may not exceed what is sufficient to fulfil their preventive purpose.

Punitive damages are assessed in the light of all the appropriate circumstances, in particular the gravity of the debtor’s fault, his patrimonial situation, the extent of the reparation for which he is already liable to the creditor and, where such is the case, the fact that the payment of the reparatory damages is wholly or partly assumed by a third person.

The Quebec Civil Code indicates that punitive damages may be awarded when:

In essence, if the law or statute does not expressly authorize punitive damage orders, the Quebec courts will not have the ability to grant such an exceptional remedy.

Let’s look at some key legislative texts allowing a person or individual to seek punitive or exemplary damages in Quebec.

For example, Article 1899 of the Civil Code states that the courts may sanction the conduct of a property owner when he or she refuses to rent a residential home to a woman for the reason that she is pregnant or has children.

A landlord may also be “punished” if he or she harasses a tenant or evicts a person in bad faith.

The Consumer Protection Act in Quebec is another piece of legislation containing provisions enabling the courts to condemn a defendant to pay exemplary damages.

Article 272 CPA states that a merchant can be punished to the extent it does not comply and respect its obligations under the statute.

The objective of this broad punitive damage scope in the Quebec CPA is to ensure that merchants comply with their obligations towards the consumers and thus dissuade them from adopting abusive conduct.

Charter of Human Rights and Freedoms

Another important statute in Quebec is the Charter of Human Rights and Freedoms also called the “Quebec Charter of Rights” (“Charte québécoise” in Quebec).

The objective of this statute is to protect individual rights and liberties, considered fundamental in Quebec society.

For example, violations to a person’s right of life, dignity, freedom of speech may result in punitive damages against the wrongdoer.

Article 49 of the Quebec Charter of Rights states that anyone violating the rights and freedoms protected by the Charter must compensate the victim for the damages caused but also punitive damages if the violation was intentional.

In the province of Quebec, unlike common law jurisdictions, it is harder to obtain an award for punitive damages.

In many common law jurisdictions, a claimant may seek punitive damages to the extent the defendant acted reprehensibly or in an outrageous manner.

On the other hand, in the Quebec civil system, the law must expressly stipulate that a plaintiff may claim punitive damages.

If a court is authorized by law to award punitive damages, it must take into consideration several factors to determine the most appropriate amount to award the plaintiff, particularly:

If the punitive damages are too high, it may result in an injustice to the defendant who may not be able to recover from the judgment or “learn a lesson”.

If the amount is too low, then the defendant may continue adopting negligent or reckless conduct in the future.

The court must find the right balance in setting an amount that will not only allow the defendant to move on but ensure that it’s dissuasive enough for the behaviour not to be repeated in the future.

So what is the legal definition of Punitive Damages?

If you enjoyed this article on Punitive Damages, we recommend you look into the following legal terms and concepts. Enjoy!

Understanding Contract Assignment (All You Need To Know)

Preliminary Contract (Overview: What It Is And Why It’s Important)