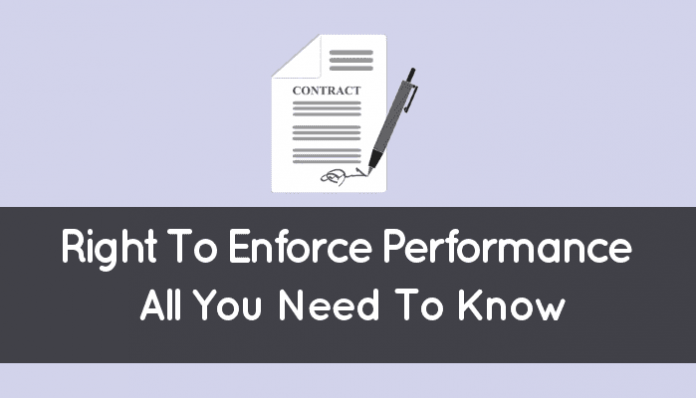 What is the Right To Enforce Performance of a contract?

How does it work under Quebec contract laws?

In this article, we will break down the notion of Right To Enforce Performance so you know all there is to know about it!

What Is The Right To Enforce Performance

In the Quebec contract laws, a contracting party has the right to demand and enforce the execution of the other party’s obligation.

In civil law, the execution of contractual performance forms the basis of a contracting party’s rights as opposed to seeking the award of damages.

Under the Civil Code of Quebec, article 1590 states:

An obligation confers on the creditor the right to demand that the obligation be performed in full, properly and without delay.

In essence, the beneficiary of an obligation (the “creditor”) has the right to demand that the other party (the “debtor”) execute its obligations “in full, properly and without delay”.

For example, if you hired a company to build you a new house, your right is to demand that the builder deliver the property in accordance with the submitted plans.

When a contracting party fails to perform its contractual obligations without justification, the creditor of the obligation can demand:

The non-breaching party may exercise the above options without prejudice to its right to demand the breaching party’s obligation to be performed in whole or in part by equivalence.

When a plaintiff files a lawsuit in Quebec seeking the enforcement of the breaching party’s legal obligations, it must prove that it has a legally binding agreement with the defendant who has obligated itself to perform an obligation that is executory.

In other words, the plaintiff can only demand the enforcement of a right that is in fact “enforceable” and where the defendant has defaulted.

For example, if a buyer offers to buy a property subject to the condition that a bank provides it with the necessary financing to complete the transaction, without the financing condition lifted, the seller (who is the creditor of the obligation) cannot legally enforce the sale of the property.

If the buyer is deliberately and intentionally failing to get financing or attempting to jeopardize the financing to escape from its contractual obligations, then the seller may have a legal avenue to demand the enforcement of the buyer’s obligation.

A significant element that must be demonstrated before the Quebec courts is the breaching party’s “default” or breach of obligation.

Article 1594 of the Civil Code addresses the matter by indicating:

A debtor may be in default for failing to perform the obligation owing to the terms of the contract itself, when it contains a stipulation that the mere lapse of time for performing it will have that effect.

A debtor may also be put in default by an extrajudicial demand to perform the obligation addressed to him by his creditor, a judicial application filed against him or the sole operation of law.

In some cases, provided it is stated in the contract, the mere lapse of time for performing an obligation will be legally deemed as the breaching party’s “default”.

The filing of a lawsuit (without sending a written notice) can also be considered a notice of default to the defendant.

Finally, the Civil Code of Quebec provides that in some cases, the default will be deemed by operation of the law.

Contract laws in Quebec provide for an exception to the parties’ legal duty to perform their obligations.

The logic here is that in a bilateral contract, each party should have a duty to perform an obligation provided they receive their intended and correlative consideration.

There is a second exception in Quebec where the non-breaching party may exercise the right of retention on the other party’s property.

In essence, if a contracting party is legally in possession of the other party’s property, he or she can retain the property until the expected obligations are performed.

A party who, with the consent of the other contracting party, has detention of property belonging to the latter has a right to retain it pending full payment of his claim against him, if the claim is exigible and is closely related to the property of which he has detention.

For example, if a repairman or mechanic is working on a person’s car, he or she can retain the car until the other party pays for the services rendered.

So what is the legal definition of Right To Enforce Performance?

If you enjoyed this article on Right To Enforce Performance, we recommend you look into the following legal terms and concepts. Enjoy!

Contributed Surplus (What It Is And Why It’s Important: Overview)

Notice to Owner: Preliminary Notice For A Construction Lien

Debt Recovery By A Law Firm In Quebec (Legal Techniques)